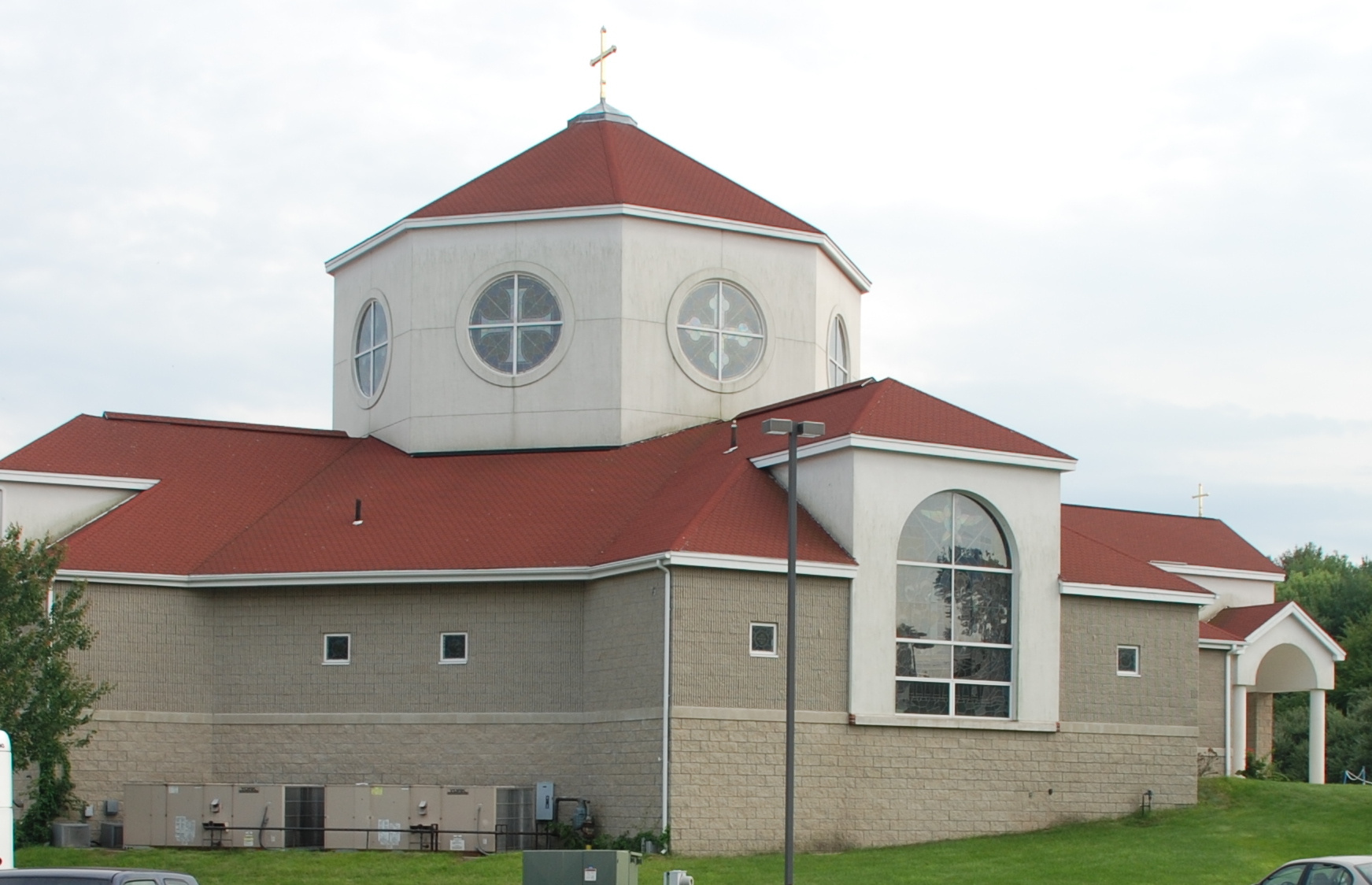 The Assumption Greek Orthodox Church ("Koimisis Theotokou") of Manchester, New Hampshire was established on August 11, 1936, under the leadership of the Very Reverend Emilianos Paschalakis. Father Paschalakis had been the pastor of St. George Greek Orthodox Church in Manchester, but was dismissed following a disagreement with the Board of Trustees. The dispute was so serious that over 100 families left with Father Paschalakis, and – with the permission of the Archbishop of the Hellenic Church of North and South America – formed their own church.

But building a new church was no simple task in the summer of 1936, when Manchester was still feeling the effects of the Great Depression. The Greek immigrants who had settled in New Hampshire’s Queen City were by no means wealthy. Those who didn’t work in the Amoskeag Manufacturing Company’s textile mills or in one of Manchester’s numerous shoe factories were just getting established in small businesses such as bakeries, confectioneries, and neighborhood grocery stores. But having a church community was as important to them as having food and shelter. The Church, and its accompanying Greek language and religious education programs, was the center of life for the Greek immigrant families in America, the vehicle through which their spiritual beliefs and ethnic heritage were preserved and transmitted to future generations.

With very little money but a great deal of faith, the founders incorporated the “Koimisis Theotokou” Greek Orthodox Church of Manchester, New Hampshire on August 11, 1936, and held the church’s first services at Saints Peter and Paul Orthodox Church. In October, the church purchased land on Cedar and Union Streets, which included the former St. Agnes Catholic School, for $9,000.00. Church services were then conducted in the third floor auditorium, and Greek School and Sunday School classes were held in the school’s classrooms. But the parish still had an $8,500.00 mortgage and no church.

Raising the money needed to build a church was the parish’s next priority. The story that has been passed on through the years says they started out with only $1.67. But that amount soon grew as parishioners dug deep into their pockets. For Panagia’s church, sacrifices would be made.

Every family gave as much as it could. Young adults donated their whole paychecks to the church, and $25.00 bonds were sold as part of a ten-year “Build-a-Church” project. Many bonds were never cashed in. Families contributed part of their grocery money; picnics, dances, and socials helped to raise other funds; and some people even mortgaged their homes to help pay for the new church.

Father Paschalakis himself designed the church, in the basilica style, and construction began in the spring of 1937. The church founders and their families did the actual labor. Everyone took a turn with a shovel and worked steadily all spring and summer to complete the church. The women provided refreshments and even the children did their part, retrieving and straightening bent nails.

Original parishioners recall that the first service in the new church was held on August 15, the Feast Day of the Assumption of the Virgin Mary. After the church was completed, the parishioners built a 10-room rectory and a gazebo and landscaped the courtyard between the rectory and the church. In 1968, the deterioration of the neighborhood surrounding the church prompted the parish to purchase a new rectory on Ray Street and to convert the old parish house to office and classroom space.

During its early years, the Assumption parish had a Greek School, a Sunday School, acolytes, a choir, youth groups, and a women's auxiliary. The women's auxiliary became part of the Archdiocese Philoptochos Society in 1952.

In 1961, the parish celebrated its 25th Anniversary under the leadership of Reverend Daniel Zeatas. The parish held many special events, including a Grand Banquet and the first Miss Greece contest, to commemorate the church’s Silver Anniversary.

By the 1970s, the old St. Agnes Catholic School, which had been used as the parish community center, had become inadequate. Major renovations were completed in 1975, while the Reverend James C. Christon served as pastor. The first floor was converted into a new kitchen and a social hall that could accommodate 300 people. Two years later, the parish purchased a 75' x 100' lot just north of the church property to be used for parking.

On August 1, 1984, Bishop Methodios installed Reverend Nicholas V. Gamvas as pastor of the Assumption Church. During Father Gamvas’s tenure, the parish flourished and experienced tremendous growth. In honor of its 50th Anniversary, the parish held many celebratory events during 1985 and 1986. The parish hosted a concert featuring Nana Mouskouri, and held a Golden Jubilee Ball and a Grand Banquet. Archbishop Iakovos and Bishop Methodios celebrated Great Vespers and a Hierarchical Divine Liturgy in October of 1986 in conjunction with the anniversary celebration.

The theme of the 50th Anniversary celebration was “Celebrating Our Past – Building Our Future.” In order to adequately plan for the future, the parish established a Five-Year-Plan Committee to study the long-range needs of the community and to develop a plan to meet those needs. The committee reported that the current facilities of the parish were inadequate and recommended building a new church complex on a new site.

In accordance with the Five-Year-Plan Committee’s report, and after approval by the General Assembly, the parish purchased 8.1 acres of land on Island Pond Road to be used for a new church complex. In the midst of celebrating its proud past, the Assumption Church looked to the future with the same courage and spirit displayed by its founders 50 years ago.

After purchasing the property, the parish hired an architect and established a Building Committee and a Building Fund Committee. The groundbreaking for the new church was held at the Island Pond Road site in August of 1987. The first phase of construction, the site work and capped foundation, was soon completed. Because the parish did not have the financial resources to finish the church, an alternative plan was approved: the construction of an additional smaller building to serve as a temporary church. The new temporary church was completed in August of 1989, and the parish moved to its new site just after the 15th of August. The Cedar Street property was leased and eventually sold.

Financial concerns kept the parish from continuing with the construction for several years. In 1994, Father Gamvas devised a plan for the next phase of construction - completion of the exterior of the church and the basement (kitchen and social hall). The parish approved the plan. Construction began in December of 1994 and was finished in the spring of 1995. Bishop Methodios officiated at the dedication of the new community center in August of 1995.

The final phase of construction, the interior of the church, was then completed. The new church opened on May 12, 1996. Bishop Methodios officiated at the Thyranixia (Door Opening) service on August 14 as part of the Great Vesper Service for the Feast of the Assumption. In his remarks, he called the completion of the church complex a miracle. It was a momentous occasion, and it coincided with the 60th anniversary of the parish.

Building the new church complex took years of hard work, planning and fundraising. There were obstacles and setbacks. But the parishioners worked together and made their dream come true. The pride of the parish is the new Byzantine-style cruciform-shaped church, set back among eight acres on Island Pond Road. Inside, the walls are pale blue and the carpet is deep red. Byzantine icons adorn the church interior, and all the windows feature stained glass icons and religious symbols. The custom ecclesiastical furniture, carved from light oak, was made by a local woodcrafter.

The church complex is home to the Assumption Church family and its various organizations – the Parish Council, the Philoptochos Society, Choir, Sunday School, Greek School, and the JOY and Junior GOYA youth groups. Since 1991 the parish has held a two-day festival on the church grounds to celebrate its August 15 Feast Day.

Father Nicholas Gamvas left the parish in December of 2000. In July of 2001, Reverend Peter Kyriakos was assigned as pastor, and he served the parish until the end of 2005. In May of 2006, Father Athanasios Nenes became the parish priest. Under his spiritual leadership, the parish has seen many innovations. The parish has a website, and a new monthly bulletin that contains photographs and can be viewed on the internet. Father Nenes holds regular instructional liturgies, during which he moves the altar table to the solea and explains the meaning of the service in Greek and English. He has also started a “Mommy and Me” group for mothers and their young children.

The founders of the Assumption Greek Orthodox Church of Manchester, New Hampshire established a lasting Greek Orthodox church community against incredible odds. Throughout its history, the parish has met the challenges it has faced with faith and determination. With the grace of God, the community will continue to thrive and provide a spiritual home for its faithful parishioners. 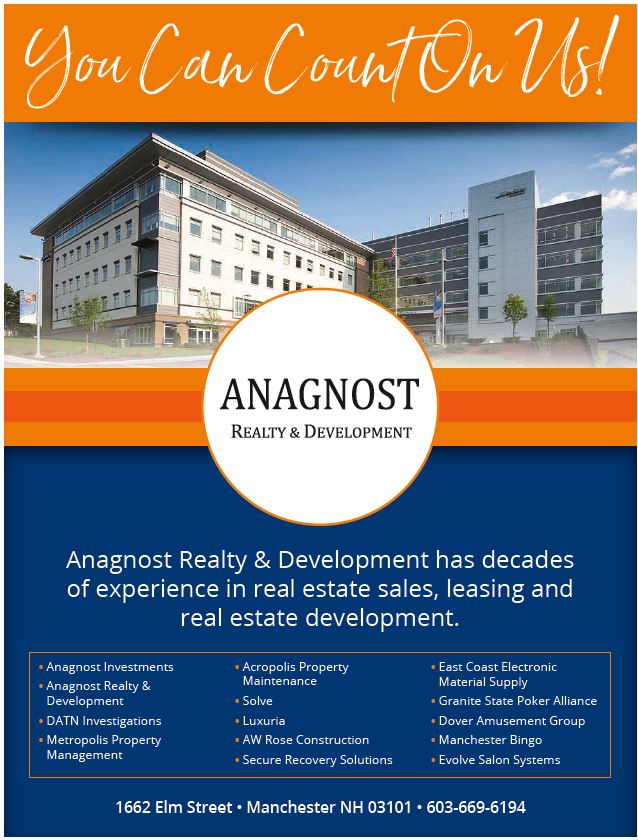